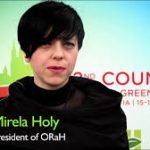 In recent years, HDZ (Croatian Democratic Union) has begun to change its rigid views on marijuana. However, more and more people believe that decriminalization is not enough. One of them is Mirela Holy, SDP Green Development Council President, and one of the most prominent public figures supporting “Lex Cannabis”. She revealed that the bill will be going to public debate within a week and that will be followed by a parliamentary debate. The bill would provide for the full legalization of cannabis.

“’We invite all those interested to participate in the public debate,’ reads the bill and comments. It envisages the full legalization and liberalization of hemp, which means that it fully envisages harnessing all the potential of cannabis for economic, recreational and medical purposes,” explained Holy to Mojmira Pastorčić/RTL Direkt on February 10, 2020.

She points out that current models of recreational regulation have either gone under state control like in Uruguay or through the private sector like in Canada and the US.

”We propose a state agency hybrid (state/private) model to maintain the high quality (of the product) in the market. When it comes to the use of cannabis for recreational purposes, the bill would allow every adult to grow as many as nine female plants with high THC content for their personal needs.”

”Hemp farming has great economic potential. Given its high quality in terms of cleaning soil and up to four times higher CO2 absorption, growing hemp can also be an important tool in the fight against climate change. The economic benefits are enormous, for the development of science, cosmetics use and paper production,” Holy added.

Experience in other countries shows that there is still a black market, but that is why, she notes, state regulation is necessary to minimize the role of the black market.

Recreational Marijuana Decriminalized in Croatia: Legal for Medical Use

According to current Croatian law, growing or selling cannabis is considered a felony punishable by a mandatory prison sentence (three years minimum). The possession of a small amount of marijuana and other light drugs is considered a minor offence which can lead to a fine of 5000 to 20000 HRK (671 to 2682 EUR) depending on the case.

As of October 15, 2015; the Croatian Ministry of Health had officially legalized the use of cannabis-based drugs for medical purposes for patients with illnesses like cancer, multiple sclerosis, or AIDS.

However, many still wonder if Croatia is still a too conservative as a society for full recreational marijuana legalization, but Holy responds:

“When I started talking about this a few years ago, reactions were very negative, but things have changed. People need to be educated first and then they will change their attitudes. The addictive potential (of marijuana) is much less than the addictive potential of nicotine or alcohol. And, to my knowledge, nobody has ever died from an overdose of natural cannabis. Nevertheless, there are major prejudices which are fueled by the interests of certain groups and industries,” Holy concluded.