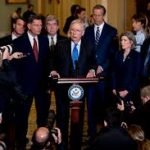 Is it just us ? But it’s intriguing that this happens just as the the bottom falls out of cannabis stock. If we were being cynical ,we might say that certain individuals on the right hand of politics have ridden the cannabis money tsunami but now as we mop up afterwards and the short term profits have been made it’s back to business as usual with the devil’s lettuce.

Here’s the introduction to the Newsweek report that they in turn pulled from Marijuana Moment.

The House of Representatives attempted to pass cannabis reforms this month by attaching riders to spending legislation for fiscal 2020—only to see them get summarily shut down in the Senate.

The riders would have prevented the federal government from interfering with legal cannabis companies and eased their access to U.S. banking services, among other things the industry has said it needs to function properly.

Instead, cannabis businesses––which are fully legal in 11 states to date––will continue to face onerous levels of red tape and uncertainty well into 2020, despite their rapidly growing size and popularity among U.S. consumers.

One of the most significant riders to the spending package would have prevented the U.S. Justice Department from using taxpayer dollars to stop states and territories from implementing their own laws authorizing possession, distribution or cultivation of marijuana. That rider was tossed in favor of a long-standing one that protects only medical marijuana.

Today, the risks and fees associated with domestic banking send many established marijuana companies overseas and prevent cash-strapped startups from getting off the ground. Another proposal canned in Congress this month aimed to ease the companies’ access to capital markets by shielding U.S. banks that service those businesses from federal regulators, according to reporting by Marijuana Moment.

Read the full article at